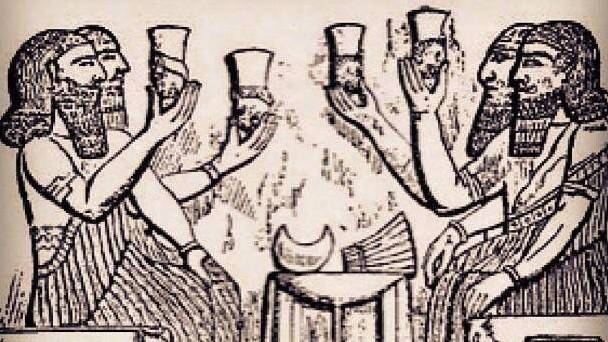 What a question! Beer is a major part of my life. I drink it most days, and have done for many years now. I believe it is a gift from the gods to us humans.

Would you believe beer has its roots traced back as far as 7000 years ago from a place called Mesopotamia (Where Iraq is now)? This doesn’t necessarily mean it was the first beer ever made, but the earliest instance scientists can trace back. Alcoholic beverages have been around an estimated 9000 years, and possibly back as far as 12,000 years. Our first evidenced instance was an Enterprising Mesopotamian woman who combined some herbs with grains and water to create an early version of the hallowed drink we know today. Though it was consumed at least in Egypt as well, as the surrounding areas. The Eygyptians along the Nile used to pay their workers an ration of beer as well!

It would appear that it was cooked as a nutritious drink rather than a way to get wasted but it ended up fermenting. It would also appear pretty much everyone drank it including women and children as part of their diet. Usually Yeast is the active element that creates the reaction we know as fermentation, but its unclear how she got it to ferment. Where would a women get yeast?

From my research it would appear nothing really changed for the next few thousand years until the middle ages. Another (would you believe Woman?) decided to add hops to the recipe. Hops gives beer its bitterness, flavors, hints and overtones. It also preserves the beer, making it able to sit on a shelf for a lot longer. The lass responsible for this was the Abbess Hildegarda de Bingen. She was later Cannonised as a saint. And God Bless her too!

It was soon after this that men took over the proceedings to mass produce and manufacture this beverage of the gods, and it spread around the world. The First of which would appear to be The Bavarian State Brewery Weihenstephan. It’s located on the site of the former Weihenstephan Abbey in Freising, Bavaria. Before the abbey was dissolved in 1803, the monks who lived there brewed and sold beer.

For more great articles keep checking back here from time to time at https://www.baconboobsbeer.com on a regular basis!